The Rock Show started it's five year run with Trevor being drafted in because of his experience, with a similar show on BBC Radio Nottingham and with Radio 1 (25 years of rock, Round Table, Peel sessions). Originally on a Saturday lunchtime it relied heavily on Jon Lewin and Graeme MacKenzie to provide the local input as Trevor was completely new to the scene. When the show transferred to Sunday evenings it was originally just broadcast to Cambridgeshire but due to changes at the BEEB it eventually covered 3 other counties. "I think we made the best of it but it was going to happen whether we liked it or not. It was a vote of confidence and it was quite flattering to the whole concept of the programme that all these other stations wanted it."

"I think at it's best the programme was like a noticeboard in your school or factory: you'd walk past it and most of the time you don't even look at it but every now and again something catches your eye or you want to use it, to advertise for a new bass player etc, so you go and look at it. It did play most of the local bands, it may not have played all of them as often as people wanted, but all of them of any repute have been played, have been interviewed, it did all those things a local radio programme ought to do. I'm a bit worried they'll stop doing it."

"You can't pretend that every local band is good or that every local band would be to my or anybodies personal taste and so there were some bands I liked more than others but I never really hated doing any interviews because almost all of them were pleasant people and nice to meet. Sometimes it was a case of personally I don't like the music but I defend to the death your right to do it. For example I wouldn't cross the road to see House Grinder as an individual but I thought what they were doing was really interesting and therefore I thought we should find out about them, talk to them and play their record and all the rest of it. Also a lot of what we did on the show was meant to be a bit funny and sometimes people didn't get the joke. I found you got the best out of interviews by slightly winding people up, as long as you're not abusive to them." 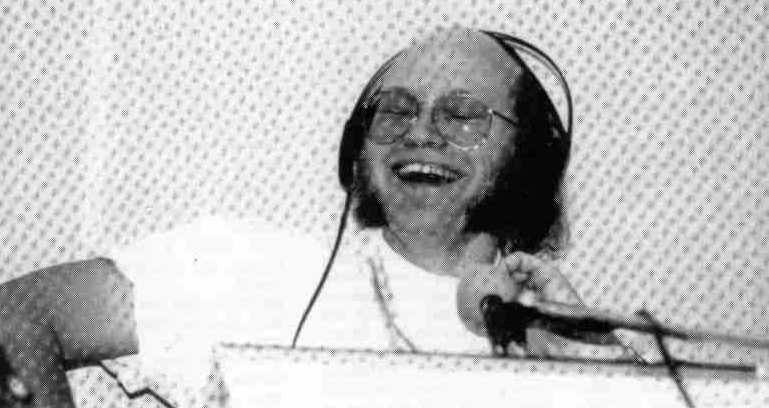 Trevor stopped doing the programme because he no longer had time to do it. "As soon as I said 'I'm going' the first reaction at Cambridge was 'oh well we'll do something completely different.' But then the reaction from the other stations was 'no we don't want anything completely different we want something completely the same.' So it turned out that the only thing they could all agree on was that they would quite like a big name and someone suggested Peel. So they approached him and to their surprise, I think, he agreed to do it. Then Cambridgeshire said 'well, actually we'd like to do our new show 7 to 8 and we'd like to do Peel 8 to 10', which is why it's been shortened."

The thing that was taking all Trevor's time was his new job as Programme Organiser at Greater London Radio (GLR). "It's my job to listen to the output and make sure it's alright. The station manager's responsible for the stations editorial policy and I'm responsible for putting it into effect. It's the best fun I've ever had, it's just so exciting to be able, with an almost blank sheet of paper, not enough money but lots of blank paper, to be told to go set up a new radio station for London."

The Landlord Doesn't Know Yet: "It was my idea, it was entirely my fault. I have always wanted to be a lead guitarist in a pop group and my life will always be a failure because I haven't achieved this and indeed never will because I can't play very well. Morris (Melbourn Rock Club, RIP) asked me to turn up and play at a charity gig and I said can I put together a band and he said yes. It was absurd at the time, Jon Lewin and I are now really firm friends, but at this time he was in Perfect Vision and I was the producer of Whistle test and we did not have a great deal in common, certainly on the face of it our musical tastes were anything but compatible. It seemed as though this might be a fun idea and he knew Martin Scott and we both knew Dave Bragg who said he could play the bass, lying through his teeth I feel, but he could certainly play the bass better than I could play the guitar so we decided to go for it. The first gig was just the four of us but from then on no two gigs had the same line-up. Julian Dawson, Nick Barraclough, Wendy, Andy + Liz Kershaw, Andy Metcalfe, Jon and Mitch from Colonel Gomez and Paul Garner all went through the landlord experience. It was just a silly idea based on the fact that it is funny playing in a group."

"I'm going to try to repeat it here, we're going to have a GLR house band which I'm sure will be just the same, it'll be really funny twice. Tommy Vance is going to be lead singer, he reckons he can sing like Jon BonJovi. Andy Peebles is a drummer. A couple of the engineers play and Emma Freud, Mary Costello and Wendy can all sing, up to a point. As good as each other I'm sure, so we've got our chick back vox."

Trevor had had some musical experience prior to the Landlord, having his own band whilst at University in Cambridge. "It was called Tramp, it lasted from Oct 71 to Jan 73. We were a progressive folk rock band. I played rhythm guitar, often acoustic, the rest of the band was flute, bass, drums and we had a girl singer so we were a bit Fotheringay and a bit Jefferson Airplane. We did lots of long songs with rhythm changes in them. The drummer got hijacked to play in another band and then the bass player left to form a group with Kimberley Rew. The best gig we did was at the Fisher Hall, I was the singer then, by default, but it was a successful gig. We were supporting the Global Village Trucking Company and we went down a storm, we got 2 encores which was unheard of for a support band. In those days you went down well if people carried on sitting down, nobody ever stood up at a gig, not even for Hawkwind."

The Cambridge scene: "I always enjoyed it but there was a lot of wanky small town attitude about a lot of things. For instance, why does the Cambridge Weekly News not write about the radio show, answer because they think they're in some way in competition. What we should have been doing was all working together and I found that a bit depressing. Having said that the best thing of all was the Rock Group Competition. It's a real market leader and to get 1500 to the final is brilliant. It's strength as a musical scene was that it always did throw up interesting groups. e.g. Perfect Vision, Your Dinner. My favourite local band was Nutmeg, but the band I had the most fun with was Colonel Gomez. They were completely my idea of a band because they were sheer entertainment and they didn't give a shit. I like bands to have the right attitude."