The Surfin' Druids story starts about a year and a half ago with the demise of The Herbs. Jez (guitar, vox): "I think we just lost interest with what we were doing at the time. Adam got very involved with his girlfriend and seemed less interested in the band. Me and Paul (Garner, drums) stuck together and still had loads of songs. Matt Maunder was the bass player at the beginning of the Surfin' Druids. He once filled in with the Herbs actually, we once did a gig as the Herbs in the Surfin' Druids format. We did the Rock Competition, came third, and we were very happy with that. I think Matt eventually lost interest, he wanted to play lots of different sorts of music which didn't fit with what I liked and eventually he was going off to college and he couldn't play at a May Ball".

Jez: "Don't Call Me Shirley did a support with us at the Burleigh. Richard was telling me that Don't Call Me Shirley were on the rocks at the time. I said oh, we'll need a bass player soon and I really liked his bass playing and he did backing vocals which we thought was necessary. He started learning the songs off the tape and we did the gig with him, which wasn't very good at all. After the May Ball it just fell apart, we didn't do anything for a long time. At the time I was also playing with the Blind Lemons. I'd met them at a recording studio and they said 'We've got a gig at the Marquee' and they were short of a lead guitarist so I stepped in a week before and had to learn all the songs in a week, that's how I got to know Simon, who's the drummer with the Blind Lemons. We're still playing with them. They're probably unheard of in Cambridge but they play down in London every now and then. We had a gig at Harlow, The Square but Paul couldn't do it. I said we really ought to do it because the posters were up so I got Simon to do it. 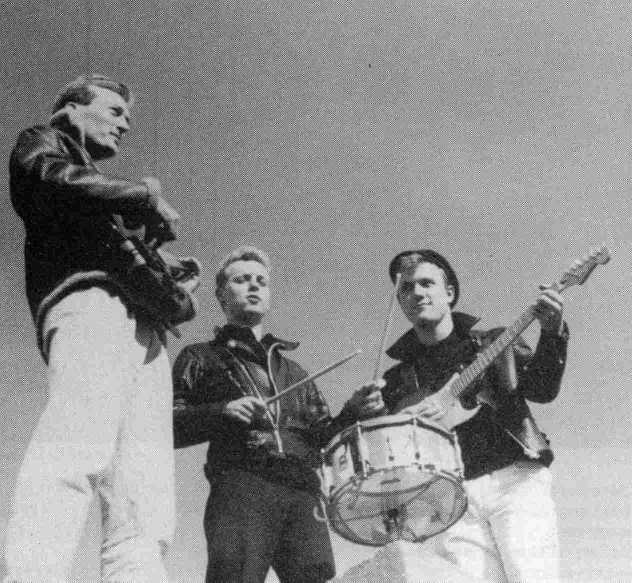 Simon (drums): Jez gave me a tape and I had a week and a half to learn the set.

Jez: It was one of our best gigs. At that gig we also had Philippa, Simon's girlfriend, on the fiddle and she plays on a few of the tapes we've got at the moment. We don't do a lot of those songs any more so we're not going to put those out at all.

The line-up as remained settled at the current 3 piece for the last 9 or 10 months, which considering the 'different line-up every gig' situation of the Herbs and early Surfin' Druids is quite an achievement.

Simon: I think it's pretty permanent as it is now. We all get on together.

Jez: I've never been in a band before were we've actually gone out socially in the evening and had a drink together like we do now. Before it was very much a working arrangement. Now we all write songs together. We've never been able to do that before. There's a new song every week.

So far the band have only ever sent one tape to one record company with surprisingly encouraging results.

Jez: Simon sent a tape off to Go! Discs and one of the ladies there was quite interested and rang me up and wanted to come and see some gigs. We rang her up a few times and she kept making promises but nothing ever came of it. I thought they'd be prepared to travel to Cambridge at least, it's not far. I won't be desperately disappointed if we never made it big or anything. We're just happy performing.

Simon: It's great fun as it is but it would be great to make a living out of it.

Richard has already had a slight taste of the record business as he played some bass on the Jack The Bear record.

Do they agree that they are a 60's sounding band?

Jez: "Only in the way we write more poppy, more sing-a-long songs, songs you can listen to once and join in on the chorus. I think a lot of that is missing from modern pop music. I really like things like the Bangles and the Housemartins because they're sing-a-long songs. I'm not very keen on all synthesizer things. I like it to be human beings playing, it's more visual and it just seems more what it's about. I think a lot of bands model themselves on a particular group they like but we don't, we just do it. Perhaps we end up sounding like some other band from time to time but it's never intentional. I like a lot of folk music, I've played in a lot of folk clubs on and off lately. Everybody says I sound like Elvis Costello, I do like Elvis Costello but I've never tried to sound like him".

Jez: "The Herbs and early Surfin' Druids songs were all about boy/girl relationships. I think we've got away from that recently. We've got a song about credit, getting into trouble with credit companies. That's as close to 'social awareness' as we get really. One of my big hates is pretentiousness, I wrote a song called 'A Man With No Name' which is about poseurs really. We've got this song called 'Saturday Night' which is about going to the pub, meeting a girl across the bar, getting pissed, her leading him on, going home, getting beaten up and ending up in hospital. It's a modern day folk song. I'm finding I can remember songs better than I used to so they're getting longer. They used to be verse, chorus, middle eight, repeat the verse but now they're getting away from that standard 60's formula. We think about the arrangements more. I used to sit down with an acoustic guitar and write a song and that's how it would end up with the band, I would say play bass and drums to that. Now we try and think how we can make the arrangement more interesting around the song. At the moment we don't go looking for gigs, we get offered enough to keep us happy. I don't think we're particularly ambitious except in an introverted way, like writing better songs. Sooner or later we're going to start looking for a manager, we're a bit lazy about promoting ourselves. We'll keep playing until people stop coming to see us."

Paul Garner, like Martin Newell, has given up music for comedy. He is a collaborator with Chris Morris and worked on the 11 o'clock show.