The Cleaners From Venus

Over the last seven years or so The Cleaners From Venus have been almost synonymous with the independent cassette ethic. Their main songwriter, Martin Newell, has appeared in print on numerous occasions promoting the cause of music unafflicted by the manipulations of the music business. Thus it was rather a surprise to meet him at BBC Radio Cambridgeshire promoting a new vinyl LP, released by a record company. Whilst the record ('Going To England') has been issued by major record companies on the Continent it has been done on a licensing basis thus ensuring that the Cleaners have total artistic control.

Naturally enough much of the interview was spent justifying this apparent 'sell out'. Martin: "For the past five years I can honestly say I haven't been to a record company, record companies have come to me, and I've turned several of them down. But there's also something I call the reasonable starvation clause and that is that I don't have a place of my own, no place to demo and up until very recently I was existing on about £38 a week. So I just think if somebody is offering me money to make some music, and they're letting me do music that's not going to be awful, is it such a crime that I could make records and make a bit of money from it?"

A lot of Martin's wariness towards record companies stems from his time with EMI in the late 70's: "I was with a manager who said 'we want you to write a song about the dangers of unemployment. It got released and my management at the time sent this song to EMI who said they weren't interested and I can understand why, because although it was a good song it wasn't particularly well produced. because I didn't really know about how producers really dominate things." In fact the song about unemployment (Young Jobless) was relegated to the B side by Martin's management. "What happened was someone at EMI, having rejected it two months earlier, heard this thing on a Radio 4 documentary and thought 'why haven't we got this?' I got called up to the office and they offered me a deal for a year. Me being completely naive just said 'oh I don't think we should be as rash as to sign for a year. I'll tell you what, why don't we not sign but you just put this record out and if you do well I'll think about signing with you'. They were really insulted by this apparently so they said 'oh'll we'll sign you for six months' and I thought 'six months, good compromise' The record was being played daily on Radio 1 and it was also used as a theme for a TV series. I should have got around £2000 and all I got was £175. So I'd been ripped off good and proper. All the time I'd been with this management I had the idea of releasing cassettes, in fact I'd already released one. We sold a couple of hundred copies and that's what planted the germ of the DIY idea in my head. I thought how famous do I want to be, if I sold 300 cassettes I'd be quite famous , do I really need to sell 1000's and 1000's?" 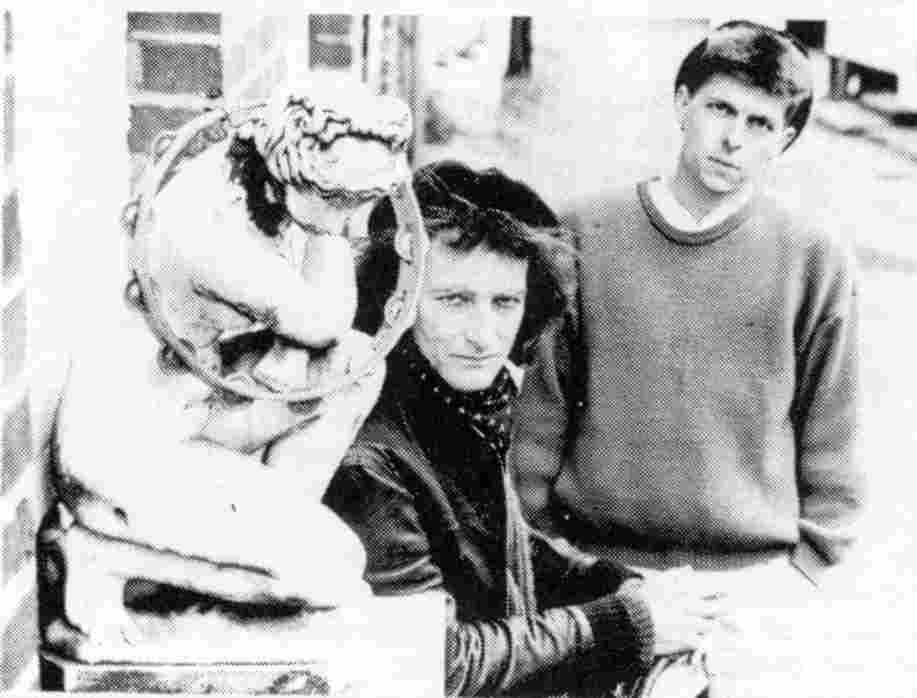 "In fact our first (cassette) album was made in my bedroom with a Rolf Harris stylophone and all sorts of stuff. It says on the back 'this album was made completely with home made gear and now go out and do it yourselves. It's your music, take it back from the corporations.'"

The Cleaners at that time were a duo of Martin and Lawrence Elliot. Martin on Lawrence: "He's a new age anarchist, whereas I like the theory and I like the idea of devolution but I couldn't actually go out and steal anything. But Lol thought we shouldn't sell this cassette, not even for 50p, we should give it away. Therefore he went systematically into chain stores and stole cassettes, hundreds of them. So that's how our first LP was free and he did in fact get done for it in the end."

Martin has recently been working with Captain Sensible. "I first met him about 5/6 years ago. He was doing something about Syd Barrett in a little studio and I got called in to help out with the stylophone and that." 4/5 years later Martin phoned a member of his ex-band Jip (who used to play Cambridge) to ask for some advice about a publishing deal. It turned out that he was engineering for the Captain and suggested Martin sent some material as the Captain was looking for a lyric writer as Robyn Hitchcock's career had really taken off in the States. "So I sent him a DIY cassette and the record ('Under Wartime Conditions', only released in Germany) and I subsequently became his lyric writer. This was 18 months ago now and I've been working with him constantly since then. I wrote the lyrics for the last single ('Revolution Now'). I wrote a whole albums worth of stuff with him which for various managerial reasons hasn't seen the light of day. It was through him that I met Andy McQueen, our manager, who'd managed Dr and the Medics when he was about 18 or 19." Having been convinced by Andy that they would have total artistic control Martin said yes. "So last autumn I made this album (Going To England)". The other half of the Cleaners is Giles Smith, who is currently studying at Cambridge University for a Phd. Giles: "I met Martin when he was washing up in a restaurant in Colchester. I'd written some songs and I asked him if he'd help me record them because he had a portastudio and I didn't. I went to do them and he liked them and we decided we ought to write songs together. I joined him when we put out the tape 'Living With Victoria Grey'. The songs from 'LWVG' went on to become the new LP (Going To England) but we went into a 24 track studio and recorded them properly."

A final word on the indie cassette scene. Martin: "Fading from major publicity but on a world wide basis getting stronger all the time, really out of desperation as the music scene gets worse the cassette scene improves. People are driven to it and there are now some better acts on cassette than there are in the mainstream music industry and I'm really pleased to discover that because I lost heart with it for a while."

Martin has given up music for poetry (he used to be a regular contributor to the Independent) and comedy. When I conducted the interview I had with me Martin Christgau of In Der Tat, who is one of Martin's biggest fans - he was so surprised at seeing him he had to leave the room to think about it! Giles Smith has written a book about his lifetime of playing in dodgy Essex bands - well worth a read.