The incestuous Cambridge scene strikes again! Interviewing Chris Mann was suggested to us by Paul Weston who just happens to be playing with Chris in the Rock Competition and indeed many years ago they used to be in bands together. Whilst you may not be familiar with Chris's name you've almost certainly heard his drumming, and very soon you'll have the opportunity to hear his other musical talents as he's releasing a solo single (under the name House Grinder). 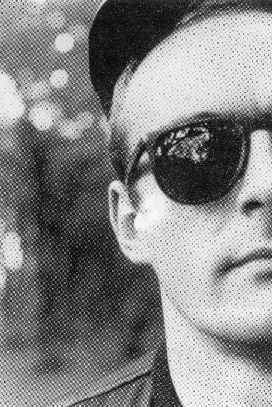 The first gig that Chris ever went to was Dr Feelgood, where he met Paul Weston, similarly attending his first gig. "Paul played in the first band that I played in, Rogue. We used to play Status Quo and Dr Feelgood songs. My final school band was New Model; we went to London to become rich and famous. That died shortly afterwards because half of us were in Cambridge and half in London. I stayed in London because I was at university. While I was there I was coming back to Cambridge at weekends playing in Five Times Stronger. That lasted about a year. In my final year at university I formed a band with Julian Evans (organizer of the Fine Weather Fayre) and did some taping under the name 'Prods In The Dark'. We sold at least six copies of that tape through Andy's.

"So What were me and a trumpeter called Neil Blacknell. Our principle was that I used to make a lot of noise on the drums and Neil would make a lot of funny noises on his trumpet. We used to put the trumpet through echo units and things like that. We used to have weird backing tapes that we made up with lots of funny noises. Our gigs generally involved us two and as many other drummers as we could find. The Glasshouse was good because it was the first gig where people asked for their money back. That time we had a backing tape of Hitler's speeches and we were making a vast amount of noise over the top. Then I joined Stormed. We parted ways, perfectly amicably, just after the recording of the single. I work shifts which makes gigging difficult, particularly with the number of gigs Stormed do. Whilst playing with Stormed I played with Somewhere In The Foreign Office for a while. When I left Stormed I started playing for Steve Breeze. I then played for the Mood Assassins, who have all but faded into obscurity as Dave Gowar now works in Stafford. I'm on the Fruit Bats record. He (Ed Harbud, Fruit Bats drummer) doesn't play drums on the record at all; half is drum machine, I play on two songs and Dave Larcombe plays on the other three. I was at primary school with Jane Edwards (Fruit Bats singer), her and her sister used to persecute me."

Whilst playing with Stormed Chris started producing his own music under an assortment of monikers. "I think it's brilliant fun using as many different names as you can think of. I don't see why you should just produce one form of music all the time. The first name was Flab. Apart from sending the tape to Peeved (it appears on 'Eye Of The Storm') I did nothing with it. I thought, I'm producing all this music and nobody's hearing it so I sent a tape to Jon Lewin ('Christopher In Heaven'). He reviewed that. Give another year and I sent Phil Johnson a tape ('Steak House Grinder' and 'Over And Over'). After the review eight people sent for a copy of the tape, which was nice as I didn't expect any response. 'Hard Evidence' and 'Shock Waves' (from the most recent tape) I thought were worth recording properly, so in the last month I've been in Minstrel Court recording those two tracks and another one called 'Rap Down' (which features Chris vocalizing). I used a drum machine, a sampler and a sequencer and I actually played percussion and guitar." 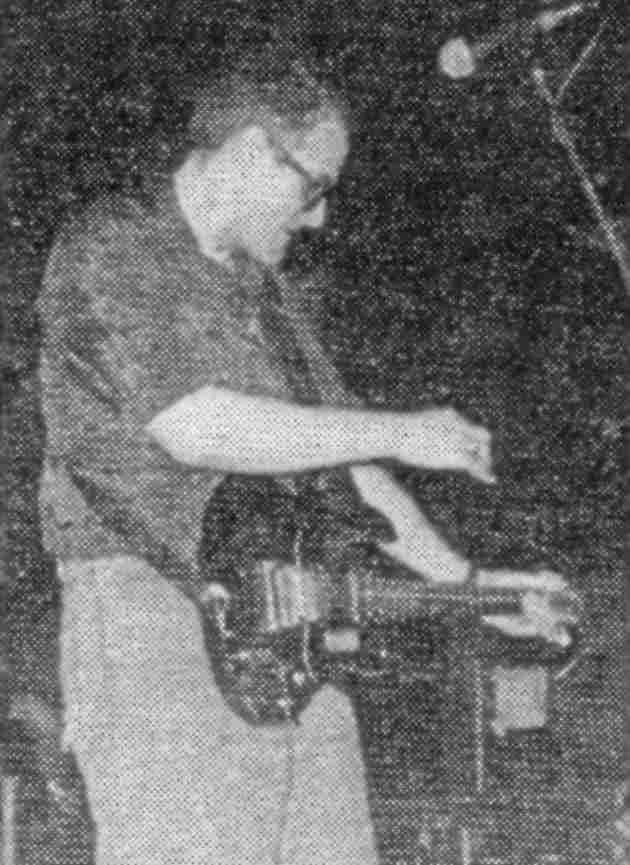 For the Rock Competition Chris has put together a band featuring Jason Smith, Phil Darke (both ex-Mood Assassins) and Paul Weston (a Sardine). "I've never organized a band before, I never realised how difficult it was, because all I've ever had to do was turn up for rehearsals. We'll do some gigs once I've written the songs. For the competition we;ve got the three songs that are going to be on the single. I'm still trying to compose a fourth one to finish off the set."

The Rock Competition rules have forced Chris to use a sequencer/sampler combination when a backing tape would have been considerably more appropriate. The tape would have been used to supply the cut-up vocals taken from radio and TV, which can't be performed in any other way. He would have liked to have used dub effects but no band can use their own sound man , so that is out as well. "In the days of 'Pump Up The Volume surely now this sort of thing should be acceptable. I think it's a shame that innovation isn't encouraged."

Recently Chris played in London with Be'ata Burn (S&H scribe). "That was atrocious. We played with backing tapes, which I'd prepared. I was playing drums, she was singing and another bloke was doing videos. I couldn't hear the tapes through my monitor which makes playing with them very difficult. I know definitely that during one song I was playing as far out of time as you can get. It got reviewed in Melody Maker, they said it was out of time, out of step and that coming from another country was no excuse for incompetence.

"If you see Mark Stewart and the Mafia playing live, that's what I'm trying to emulate. They've got Keith LeBlanc and Tim Wimbush playing for them and they're the people who played on 'The Message'. Despite being good musicians, they don't feel that they've got to play nice tunes. Because I've been playing for so long now I really ought to be playing something more subtle but I don't want to, I want to use my musicianship to produce something even louder, and more precisely loud. I don't see why once you've got the technique you should bland out.

"What I'm working on at the moment is good drum patterns, good bass patterns and putting a lot of sampled voices over the top of it. With the cut ups I feel I can produce something that is coherent and powerful, whereas with lyrics I don't think I can always produce the same power. I don't have any messages in my music, I just like making music that makes me feel good. I write about love sometimes, how bad it is. 'Rap Down' is lyrically anti-violence. I like bands that waffle on about nothing in particular, completely irrelevant lyrics.

This was the longest and most interesting interview I did for Scene and Heard and it took a long time to edit it down to a reasonable length. Soon afterwards we produced 'Zipping Up' under the name Featuring Karen Wheeler. A number of Chris's tracks appear on various Peeved Records compilations.