Andy White should be at least vaguely familiar to Cambridge audiences from his performances as Andy Talking And The Ghost Of Electricity whilst a student here. Since then he has gone on to record two LPs for Decca, the second of which, 'Kiss The Big Stone' has just been released.

Cambridge "was a good place to come after Belfast. I mean a lot of Irish kids leave and one of the ways you can leave is by being lucky enough to be able to continue your education. It's one of the passports for getting out. The key to the records is that the first one is black and white and the second is coloured in, the letters are coloured in, the picture on the back is colour". Rave On Andy White "was concerned a lot with growing up in Belfast. The first album wasn't totally concerned with that but it was all coloured by that and it was quite black and white. The second record, I've been away, I've opened up, we had a little bit I had more time to do it and there's loads of musicians on it. It's all opened up musically and lyrically really".

"I think the whole thing started when I recorded and put out Religious Persuasion, that's like day 1 for me. Anything before that is not of any interest to anybody. I was in a punk band in Belfast but it was nothing to write home about. I always think what I really wanted to do really came together when I recorded Religious Persuasion. That was the first time I really wanted to go for it. I knew that was going to happen but I waited to find the right people to do it with, which took a while. I didn't ever go looking for a band or anything I just knew they'd turn up. Rod, my producer and piano player, he's my main man and I've known him since he was at school. When we got together that's when things really started to happen. We went up to Homestead Studios near Belfast, and we've sort of stayed there ever since which is great and each further development in the music and everything is conditioned by us meeting more of the band. The first time there was just Rod, and then on the (first) album Brendan our drummer arrived and the engineers were playing on it, it was a real family atmosphere on the 1st album. The 2nd album has got loads of people on it, it's really swell, each time it sort of grows." On 'Kiss The Big Stone' Andy is joined, amongst others, by Bruce and Pete Thomas from The Attractions. "They've always been my favourite English band since they started. They were just hanging out in London and I met them and they were into the first album, so I just said 'would you like to come over for a week?' Ardy McClin who plays with the Van Morrison band, he's on it as well. He plays with Van Morrison's live band and he's in Patrick Street. They're like a traditional Blind Faith, they're like a super group of all the traditional musicians. His wife, who plays the fiddle on the first track she's well known in Ireland, she's called Nola Casey. They're such fantastic players those people and they've got so much music in them and if you ask them to play something a bit different it stretches them a bit. They can really play well, and if you ask them to play a different type of music it just brings something else in them really".

"I don't know how long I went round with the demo tape. You can't just send them, there's no point, you've got to go round and hammer on the doors. You've got to show them your face. Quite a lot of them were interested but Stiff believed in doing things very quickly. You'd bring them a tape which they liked and Dave Robinson (another Irishman) who ran it would put it out in two weeks time. As the rest were humming and hawwing and wondering about contracts we went with Dave and he stuck it out really quickly. I was signed up to a publisher before that, with Chappells Publishers, they gave me the money to record it. It was very cheaply done, we did the first EP in three or four days. Stiff demised just after the single came out, it was probably one of the last Stiff singles. As soon as everybody else realised that Stiff were going to sink all the big record companies looked at all the people on Stiff and made very fast offers to them and again with money from Chappells we'd gone and done the album because I always want to do that stuff nearer my home with musicians which I know. I know we can do it, I know we can put it out and I know it can stand up with anything. It only took a few weeks, it's not a sort of Pink Floyd vibe. So we had it all ready for them so Decca knew exactly what they were going to get, and I wasn't going to change it anyway. It was quite clear cut for them. It's kind of four albums and we've done two of them so there's two more. Every July they decide whether to pick you up or drop you. The 2nd one we heard it sold 5000 in the first couple of days. The last one ended up about 15-20000 in Britain and it's released throughout the world. In the most bizarre places you'll get a few freaks who'll go out and buy it. I hope this one will go well, I'm kind of proud of it and I'm kind of proud that we retained a lot of the stuff from the first album but changed it, it's sounds very different to the first one, but it comes from the same place. We just let it grow really, we didn't go mega or anything, we didn't go to LA or London to do it. We didn't get in a fancy producer to make it sound like like what people want to sound-like nowadays. Like Suzanne Vega or someone like that".

"If a new band goes on the road it requires a lot of backing from the record company, at the moment we haven't got the cash. We're going to try and do that in the near future. They're all waiting to go out on the road. Up to now I've gone out with my acoustic guitar because I can play anywhere at anytime with the minimum of hype or fuss or bother. I can go anywhere in the world like that. I went to America twice last year, which is an incredible, unbelievable experience, I mean to go on the plane from Belfast to Los Angeles it's like a different planet you know. They're all laid back, they just cruise around in cars all day, taking drugs, listening to music loudly and the sun's shining and everybody's smiling, it's a good laugh. You can't take it too seriously or take it to heart too much. Tower Of Babel I wrote whilst I was out there in a hotel room. It was very effecting, we got a great welcome. At first you'd be offended by how much trash there is but in the end you give in to it, it's really exciting, all the crap on the TV and the three million radio stations and all the huge signs as you go down the street, huge buildings. It's all excessive, but it's very exciting if you just give yourself into it". 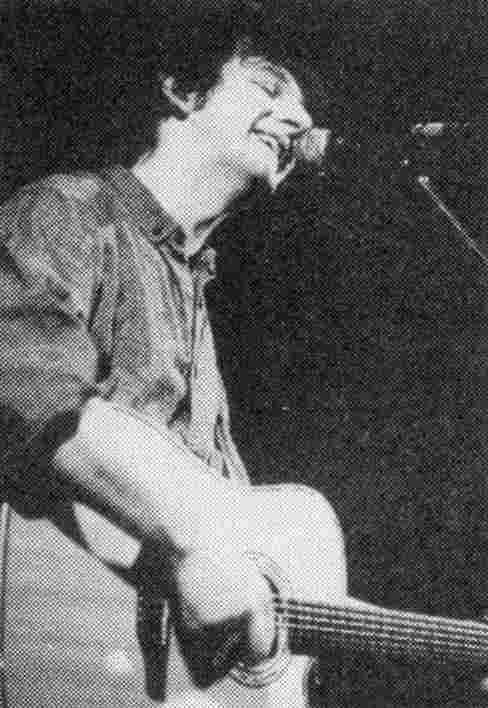 "Why I started of and still am touring on my own is because I'm not prepared to have the big hype record company vibe on it, I don't like that I think it always looks fake. I've supported people whose first stuff has come out and they've got 10 people selling merchandise and nobodies come to see them. You should start off and work really hard on your own and build it from there. I think it's working and I don't think you'll hear another LP like Kiss The Big Stone this year. I think we've found our voice on it. It's got 10 songs on it but it's really only got one song on it. I always think of it as one song. It's got a thread, quite a strong thread running through it. I don't think you have to know that to appreciate it but there's definitely there's no other order those songs would go in. If you have a CD player (no CD, no comment) there's a song at the end, 'Come Down To The Sea' which is the first song, repeated at the end in a very, very different fashion, a very gentle fashion. That is in fact the complete cycle, it's not incomplete without that but we couldn't fit it on the record. The full cycle is on the CD".

"It's quite bare when I play live but it's very focussed and the words are very clear which I like. If you want to groove on the music, groove on the records. I listen to good people with good words and good music, Dylan, Van Morrison, Elvis Costello, Lou Reed, Waterboys, and especially instrumental folk music. You hear more of that live than on record".

"You've got to be proud of what you do, it would really hurt inside if you brought out something which you thought was even slightly fake. When you're writing songs you don't ever think about anything like that. It's what you do once you've written those songs that's the question. But at as long as I can keep doing the records the way I want to do them and progress in that way then I'm happy".

At the time Andy was not very keen to acknowledge anything before the first record, so I left that stuff out but here are his thoughts on the tape releases:

"It was a great help being on a couple of compilation cassettes you know, that was good. There was a German one (Reynard The Fox, In Der Tat) I did and Another Spark (Chris Heath and Steve Xerri) which was put together here in Cambridge. I don't reject it or anything, it's just that I think what I was really meant to do started with the first single which was recorded in a studio, the rest of it I never disown or anything. I just did it in a room in some-one's house on a cheap tape recorder which is great, it's where you should start off. I got a good reaction from it, from a few people and I was really pleased about that."